This is my continuing study of art that distorts, smears, or obscures the faces of its subjects. I am trying to get my head around this art – in all its forms. It seems to me to be almost an art movement – there are hundreds of artists that do this type of work exclusively. They are men and women from around the world. They are educated, self taught, professional, and hobbyist. They work in all different genres from photography to sculpture. I think ultimately my goal is to understand what this art says about our world, the culture of our world. I think that collectively this art is saying something about this moment, I think that it means something beyond simply someone smearing their fingers through the paint on a persons face. So I muddle, picking through the minutia of art, looking at different works, parsing them for meaning, comparing them and writing ridiculously ungrammatical sentences. As always if you see your art here and want me to remove it please email me at clisawork@gmail.com and I will take it down right away. None of this art is mine. All art is attributed, and if you click on it will take you to the spot where I found it.

So one of the bloggers I asked about the defacement movement in art said that this part of the “zeitgeist” of the 21st century.  What is zeitgeist?  The definition from merriam websters is:  “the general intellectual, moral, and cultural climate of an era”.  So how then is this of art of obscuring, marring, and distorting faces a reflection of our current “intellectual, more and cultural climate”?

The artist wants to show whats on the inside, on the outside.  Specifically referring to facial expressions — soooo in this instance trying to graphically show what restlessness would look like if we could see a visual manifestation of it?  Well, here’s the thing – therapy.  I don’t mean for the artist (who has probably had some).  More than ever, at least in the United States, we have had therapy, heard about therapy, know about therapy and pschycoanalytic terms.  That is how we understand the urge to turn our heads inside out.  To make visible to invisible realm our psyche’s.  So many of these defaced portraits are called self portraits.  Are we trying to psychoanalyze ourselves through art?  Maybe we need this:

We vent our demons on canvas, and by viewing and having this art in our environment?  Is this voyeurism?  Are we reassured that maybe other people’s interiors are as much a mess as our own?  Speaking of an interior mess – how do we deal with it?  Cover it up:

It is a little difficult to see,but the top figure appears to be wearing bandages with no holes for nose or mouth.  This suggests either injury or captivity, either one of which has profound physical and psychological repercussions.  This can be applicable on an individual level for viewers in many many ways.  The bottom picture also shows a bandaged figure, and he also appears to be either wounded and/or in captivity.  They’re kind of choose your own adventure painting/photo .    Even marketing is aware of what our inner struggles signify:

Leave the mannequins blank leaves room for us to put ourselves in the clothes.  Not only that there’s got to be some sort of meaning behind a faceless figure sitting under a piece of faceless, formless piece of art.  To ponder. . . .

Moving on – what about our modern environment.  Much are that features defacement also features interaction with technology (use this term loosely).

This work also features surrealistic overtones, but it seems as if the figure is cut off from the ground by the power lines.  They can fly, but they are not truly free.  Now about this:

The face appears replaced by a monitor that is not working correctly.  Also the original image appears to be a vintage one.  Vintage collages are an entire post, which I will do soon.  Many many vintages photos have been sacrificed to make collages.   If we follow the artists intent to its conclusion, then this figure appears to be consumed by a screen – either television or computer.  They have literally become a body with a television or computer for a face.    Juxtapose that against a vintage image and the artist is making a statement about how we used to be and what we are becoming.   He used the face as a stand in for the brain or soul – he didn’t put the screen in her chest, or choose a picture showing more of her body and put the monitor in her stomach.  The face is a powerful image, and getting rid of it is a powerful signifier.   Another place where faces disappear is online – we don’t see our own faces online.  Also we choose avatars to represent ourselves.  Very rarely do we communicate face to face online.  This is magnified in video games.  Here is an illustration from the video game Assassins Creed:

The figure doesn’t get a face because it doesn’t need one – it is you.  Once you start playing, you are the figure.  It has in the virtual world your face, without actually having your face.  All video games are like – some digital figure represents you.  They sometimes have a face, and sometimes they don’t, but either way they become your stand in.  We do have a conflicted relationship with technology, embracing it one, and yet on the other:

This figure looks suspiciously like a robot in the move The Signal.  I don’t want to give too much away, but there were no flowers behind the face of the robot on the The Signal.  I think that the same idea behind the woman with the screen for a face exists in this work.  Our brains, represented or hidden, by our faces have been invaded or taken over by technology.  In this particular work the artist’s surgically precise cuts to expose what is behind the face, give it that high tech feel.   This next work is completely embracing technology:

So a computer uses images from the Hubble Telescope and generates these pieces of art based on a program.  The artist posits that:

What if we use technology to outsource the creation of art so more of these potential artworks are finally created? Modelling artistic decisions into software would provide a generative assistant that could even survive an artist in the creation of meaningful works of visual art. This project is a first experiment around this concept. VIA

So we can outsource our art to computers?  The face on this particular piece is till distorted – did the programmer intend for it to come out that way, thus expressing the Zeitgeist of this time, or did the computer do that on purpose?    Also if you take the artist out of art, which we have done already quite alot with prints and reproductions and photoshop, and copy machines – is it still art?  Not to say for a minute that digital art created in photoshop isn’t art – there are immensely talented artists creating unique and beautiful digital work.  Is the difference intent?  I intend to make, I intend to copy someone else’s work, I intend to change someone else’s work just a little and say it’s mine.  Computer’s don’t have intent – at least not right now on April 11, 2015 they don’t to my knowledge.    There is more to art than intent.  More to art than materials if some art is only zeroes and ones in a computer.  Maybe this is part of our Zeitgeist – this struggle to understand what is art in the digital age?

One more point in our current zeitgeist – there are many but only one more for now.  Politics (collective groan) –

Politics is incredibly faceless.  No one really knows who represents them in politics.  There are constant struggles, many violent, to put people in office who will represent “the people”.  Most societies are lousy with politicians, would be politicians, and former politicians.   It is a career path.  Also governments make individuals faceless – they take away people’s identities – like the top photo.  People are forgotten, swept away, buried all in service to a political or government agenda.  These stories are as old as, well as old as art that was used to record them for the Egyptians on the pyramids.   Probably older.  It is no wonder we want to scratch off politicians faces.  Or show ordinary citizens being covered up by government symbols like flags.  Here is a more subtle cultural and political idea portrayed by art: 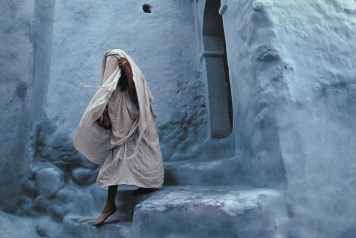 The Photographer, Harry Gruyaert, has for this series of photos deliberately chosen photos where the people’s faces are obscured.  True, they are taken in a country where traditionally women cover their faces, but if you look closes even the men’s faces are obscured by shadow or have their backs turned.  This was a deliberate choice on the photographer’s part.    So much of what I might think of as “Middle Eastern” culture ( I think this is in Morocco which is actually North Africa, not the Middle East) is unknown and foreign and alien to me.  The Covering of the face and body by women is the tip of the iceberg, but it is representative.  I see that and it kind of clicks in that here is someplace I don’t understand – I can’t see your face and therefore I can’t know you, I can’t understand you.  By choosing to obscure even the men’s faces that foreignness is reinforced.   This is the ultimate part of my western zeitgeist – this culture gap.  This tension with what I assume to be Islamic societies.  It extends to all “others”, but this perfectly represents it.  This physical representation of blocking off the face shows my inability to understand others who are not like myself.  Not only that but the photographer frames all the people in his photographs at a distance – no up close personal shots showing dazzling eyes or beautiful smiles.  The viewer is kept at a distance, reinforcing the cultural distance that is already there.   We are separated.

Part 12  Collage – Hand Me My Scissors and Glue!

Protect me from what I want
Mahaveer Swami

The Best of the visual Web, sifted, sorted and summarized

Capturing Street Art In Los Angeles, One Photo At A Time

Visual Arts from Canada & Around the World

the way of improvement leads home

reflections at the intersection of American history, religion, politics, and academic life

Dark Food to Die For

Halloween food and horror recipes straight from the Devil's own Cookbook

The Official Blog of Drayton Hall

Music, Movie, TV and Pop Culture News for the Mainstream and Underground

A blog curated by Roberto Cruz Niemiec with the best of Architecture, Design and Art.